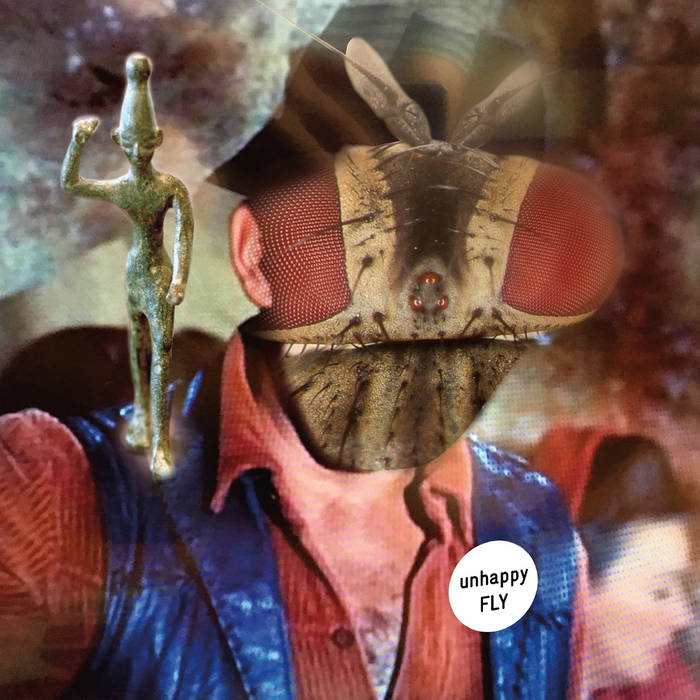 Unhappy Fly
Dudanski and Xentos have joined with vocalist/radio artist Sarah Washington and sax blower John Glyn for their latest project. Four years of recording in and around Granada and UK using locations ranging from abandoned soft drinks factories to gin-slugging auntie’s living rooms have resulted in this Unhappy Fly collection: a syncopated soundscape of para-reductive pop based on Xentos’ valorised rococo productions allied with Dudanski’s daedalian drums. Featuring a sizeable crew of musical collaborators, and drawing on Washington’s curlicued harmonies and John Glyn’s multiple saxes, it is a music that invites slippery categorisation. Unhappy Fly draw on a deracinated studio experience combined with impulsive tune-smithing to create an album that scoops up the noisy dogmas of the past and relocates them to the far side of the 5th dimension.

Xentos Fray Bentos
Kicked out of the Avant Garde for misbehaving, Xentos ‘Fray’ Bentos (Aka Amos, Narki Brillans etc) sat around sulking for many a year, sending obnoxious texts and tweets. Eventually he realised the best way to redeem himself would be reacquaint himself with long lost pals and, working together, produce a series of exquisitely crafted songs - about life, love and some of the more pressing contingencies in between. Xentos ‘Fray’ Bentos is a keen singer and multi-instrumentalist as any number of children whose Christmas’s he has ruined can tell you. His unique collection of instruments includes some poor examples of blowpipe, a barely functioning synthesiser and an early Baroque clavichord, all of which feature on the music of Unhappy Fly along with the usual mess of synths, goblets, guitars, bass, piano, what-have-you.

Richard Dudanski
A drummer/multi-percussionist whose musical bio starts back in 1974 with Joe Strummer in protopunk, squat rock band “The 101’ers” and takes us through a whole heap of bands, traipsing his traps through West London streets with the likes of Tymon Dogg & The Fools, Bank of Dresden, Tesco Bombers, Vincent Units, The Raincoats, metal-box Public Image Ltd, Basement 5 etc. Dudanski’s next adventure involved a wide-ranging six month trip to Brazil to soak up the rhythms of the maracatu and funk Carioca…Since relocating from London to Granada (Spain), Dudanski has continued with numerous local musical projects although his latest adventure reunites him with Xentos F.B. The pair can map out a long and gruesome history together, most notably recherché recordings featuring Nancy Sesay and The Melodaires, The Decomposers, Amos &Sara, The Punishing Strings, Poop Deck Three, Die Trip Computer Die.

John Glyn
John Glyn has played with some people who can be regarded as well-known, and some who are obscure. He enjoys playing in genres that can be easily accessed on mainstream radio, and some which many would not recognise as music. He has an ordinary longing to be admired and loved, and also a preference to remain private. This has been happening since about 1970.